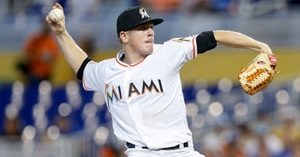 Former Bend Elks closer Jeff Brigham of University Washington made his big league debut yesterday as he started on the mound for the Miami Marlins.

The right-hander tossed 3 innings in the Marlins 6-1 loss to the Toronto Blue Jays at Marlins Park.

Brigham is one of several alums that made their big league debuts this season like pitcher Shane Bieber of Cleveland (Cowlitz, 2014) and infielder Mitchell Walding of Philadelphia (Cowlitz, 2011). Like Brigham, Bieber also debuted as a starting pitcher, on May 31, 2018. Bieber is a key part of the playoff contending Indians as the UC Santa Barbara alum has made 15 starts and gone 8-3 with a 4.66 ERA in his rookie campaign. Walding also debuted on May 31, 2018, with the Phillies.

On August 3, the hard-charging Oakland A’s called up WCL alum outfielder Ramon Laureano (Medford, 2014) who has been a fixture in center field since.