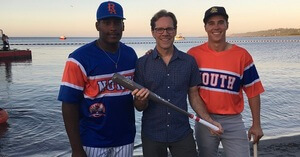 In a derby hosted by the Lefties, conditions were best suited for righties as right-handed sluggers dominated at this year’s WCL Home Run Derby.

The thrilling finish featured a finals tie of 10 water bombs each by Brown and Hawken. The tie was broken in an extra round as each slugger got five swings. Hawken led-off with 4 homers in 5 swings; Brown captured the title by going 5-for-5 with his extra swings, homering each time to win the Saltwater Splashdown crown.

The WCL All-Star Game is set for Tuesday, July 17 at Civic Field in Port Angeles. First pitch is 6:35 pm.

The 2018 WCL All-Star Game rosters are below:

* replaced
Note: Universities and colleges noted are where players will be enrolled this upcoming school year.
ABOUT THE WEST COAST LEAGUE