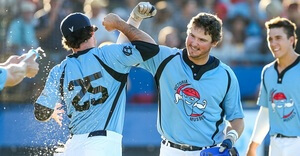 The race for the West Coast League’s final playoff spot got even hotter after Tuesday night’s results.

With Corvallis’s 2-0 win over Yakima Tuesday night at Goss Stadium, now Victoria (27-26) is the only contender for the North’s final playoff spot that controls its own destiny. With a Victoria win over Portland on Wednesday, which would complete an impressive series sweep of the South first-half champ Pickles, the HarbourCats will return to the postseason for a third consecutive season. If Victoria and Kelowna both finish 28-26, the HarbourCats advance as they hold the tiebreaker advantage (by virtue of their superior record against first-half champions Bellingham).

If Victoria loses, the Falcons (27-26) automatically advance to the North Divisional Series, win or lose Wednesday night, as they own the four-team and three-team tie-breaker.

Regardless of Wednesday’s outcomes, Bellingham will travel to British Columbia for game one of the North Divisional Series on Friday, August 10, either at Wilson’s Group Stadium at Royal Athletic Park in Victoria, or Kelowna’s Elks Stadium.

With the Knights’ Tuesday night win (20-6 in second half) and Portland’s loss (19-8), Corvallis clinched outright the South second-half title.

Game one of the WCL South Divisional Series is set for Friday, August 10 at Oregon State’s Goss Stadium in Corvallis, with games two and (if necessary) three at Portland’s Walker Stadium at Lents Park on Saturday and Sunday.

To check out the current WCL standings, click here.