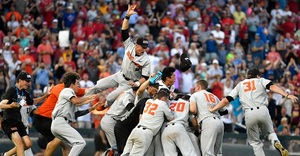 The Oregon State Beavers of the Pac-12 went 6-0 in elimination games at the College World Series to capture the program’s third national title. Head coach Pat Casey’s Beavs shutout Arkansas 5-0 yesterday in the CWS finale to secure a national championship.

West Coast League alum Adley Rutschman (Corvallis, 2016) was named the College World Series MVP. The switch-hitting catcher from Sherwood, Oregon went 17-30 over the series and 3-for-4 in the finale; and set a new record for hits in the series with 17.

Pictured is former Cowlitz Black Bear Andy Armstrong leaping on the top of the Beavers dogpile.

Oregon State is holding a National Championship celebration today at OSU’s Goss Stadium, the home of the Corvallis Knights.

Mitchell Taken in First Round of MLB Draft