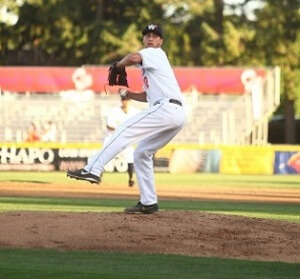 Molnar, a senior this past spring at Aliso Niguel High School in California, has made 4 appearances and 3 starts this summer, and is 1-0 with a 2.94 ERA over 18.1 innings pitched. He was selected in the 25th round of the 2015 MLB June draft by the St. Louis Cardinals.

Learn more about Kyle Molnar in this piece by Clint Longnecker of Baseball America, “A Day In The Life: Kyle Molnar.”

There have been 8 no-hitters thrown in the WCL since the league was established in 2005, one of which was a perfect game.

* Clayton Mortensen (Gonzaga) and Quinn LeSage (Campbell) of Wenatchee combined on a no-hitter vs. Kelowna, the first in the WCL, on July 27, 2005 at Elks Stadium. Wenatchee won 11-2. Mortensen pitched 6.1 innings and gave up two earned runs (walked 4, struck out 5). LeSage pitched 2.2 innings.