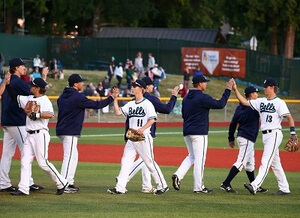 The first two spots in the 2018 West Coast League playoffs have been secured by the Bellingham Bells and Portland Pickles. The Bells have clinched the first-half North title while the Pickles locked up the first-half title in the South.

Bellingham will look to make a return trip to the WCL championship series in 2018. The Bells were WCL champs in 2014 and made it back to the WCLCS in 2016, where they ultimately fell to the Corvallis Knights. Bellingham’s pitching staff has been especially stellar in 2018. UCLA freshman-to-be Nick Nastrini’s 0.39 ERA is the lowest in the WCL. In addition Pacific Lutheran University sophomore-to-be Justin Armbruester has the most strikeouts in the league this summer, with 40 in just 26 innings of work.

Portland has enjoyed instant success since joining the WCL this season. The Pickles have been particularly strong on offense. Cal State Northridge senior-to-be Joey Cooper leads the WCL with six home runs and current WCL Moss Adams Player of the Week Zander Clarke has the most RBIs in the circuit so far this summer. The UC San Diego senior-to-be has 24 RBIs in just 14 games.

This is the third season the WCL has had a split schedule with a first-half and second-half winner.