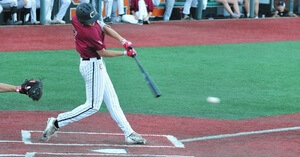 The Corvallis Knights advanced to the West Coast League Championship Series for a third consecutive year with a sweep of the Portland Pickles in the WCL South Divisional Series.

The two-time defending WCL champions edged the Pickles 4-1 last night in 11 innings at a sold out Walker Stadium in Portland.

Both WCL South Divisional Series games went to extra innings with the Knights winning 3-2 on Friday night at Goss Stadium in 10 innings.

The Knights will face either Bellingham or Kelowna in the WCLCS. Bellingham evened the WCL North Divisional Series last night with a thrilling 4-3 win over the Falcons in 12 innings. Game three is tonight at Joe Martin Field at 6:35 pm. The winner will host game one of the WCLCS on Tuesday, August 14.

Portland pitching held the Knights to only one hit through 10 innings. But Corvallis did damage in the 11th-inning as sophomore-to-be infielder Chad Stevens of University of Portland – a 2018 WCL all-star – delivered the Knights big hit, only its second hit of the game, a two-run double to break the 1-1 tie.

Reliever Abbott Haffar of UC Riverside picked up the win, as he tossed two pressure-packed scoreless innings; and Louis Crow of University of San Diego earned the save, striking out 3 in the bottom of the 11th.