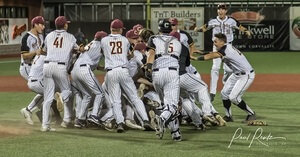 The Corvallis Knights outlasted Kelowna 5-1 in a hard-fought WCLCS game two battle at OSU’s Goss Stadium before a crowd of 1,286 on Thursday, August 16.

Game two featured excellent starting pitching by Connor Redmond (Cal Poly) of Corvallis and Jared Akin (Concordia) of Kelowna. Redmond would toss 6 2/3 innings to earn the win, giving up only one run, a solo homer by Garrett Kelly (UC Davis), while striking out 8 and walking only one.

Corvallis broke a 1-1 tie in the third-inning on a RBI single by Cody Hawken (Portland). The Knights added three insurance runs in the 8th as Chad Stevens (Portland) delivered a one-out sacrifice fly and Cole Cabrera (Cal Poly) a two-out, two-run single.

The final play of the WCL season was made on a spectacular play up the middle by future Oregon State Beavers shortstop Beau Philip, who also made a great defensive play to open game two.