Corvallis Takes Game One of WCLCS 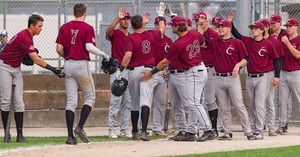 The Knights scored 8 runs in the top of the first to set the tone. 13 Corvallis batters came to the plate in the first. The big opening inning featured a three-run homer by future University of Portland first baseman Trace Tammaro.

Corvallis would go on to pound out 23 hits on the night. Starting pitcher Kolby Somers of University of Oregon got the win for the Knights, as he tossed 5 solid innings.

Game two of the WCLCS is set for Thursday, August 16 at OSU’s Goss Stadium with a first pitch of 6:30 pm. It’s a must win for Kelowna to force a decisive game three at Goss Stadium on Friday, August 17.