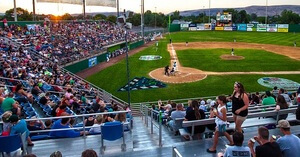 The race for the West Coast League’s final playoff spot, as well as the temps in the Pacific Northwest, are really heating up.

It’s a red-hot race for the final berth in the North Division. Among the four contenders for that last spot, the only club that controls its own destiny is Yakima Valley. The Pippins (15-10) can clinch a second-half title with wins in their final two games vs. the Corvallis Knights, and host game one of the WCL North Divisional Series at Yakima County Stadium (pictured) on Friday, August 10 vs. Bellingham.

If the Pippins were to lose to the Knights tonight or tomorrow, Bellingham (17-11), the North’s first-half champ, would clinch at minimum a tie for the second-half title. If Bellingham wins the second half outright, the final playoff berth will go to the team with the best overall record among the contenders.

Those contending are the Pippins, Wenatchee AppleSox, Victoria HarbourCats and Kelowna Falcons. All four currently have 26-26 overall records.

Again, the Pippins will make all below scenarios moot if they win their final two games at Corvallis.

But if Corvallis wins one game vs. the Pippins, Wenatchee (15-11) can tie Bellingham in the second half with two more wins at Kelowna, and thus claim the North’s second berth and host Bellingham in game one of the WCL North Divisional Series on Friday, August 10.

Victoria can punch its ticket to the playoffs by sweeping the Pickles at home while Wenatchee splits its final two games with Kelowna; or if Kelowna takes two vs. the AppleSox, as the HarbourCats own the tie-breaker with the Falcons.

And the last possible scenario is if the remaining two games are split in each season-ending series – Yakima Valley at Corvallis, Wenatchee at Kelowna and Portland at Victoria – and a four-way tie for the best overall record occurs with all four teams at 27-27 whereas a four-team tie-breaker will determine who advances.

There is a lot at play these final two dates in the WCL regular season, with only the Yakima Valley Pippins controlling their own destiny. As things are, the league’s final playoff berth won’t be determined until Wednesday night. What a season!