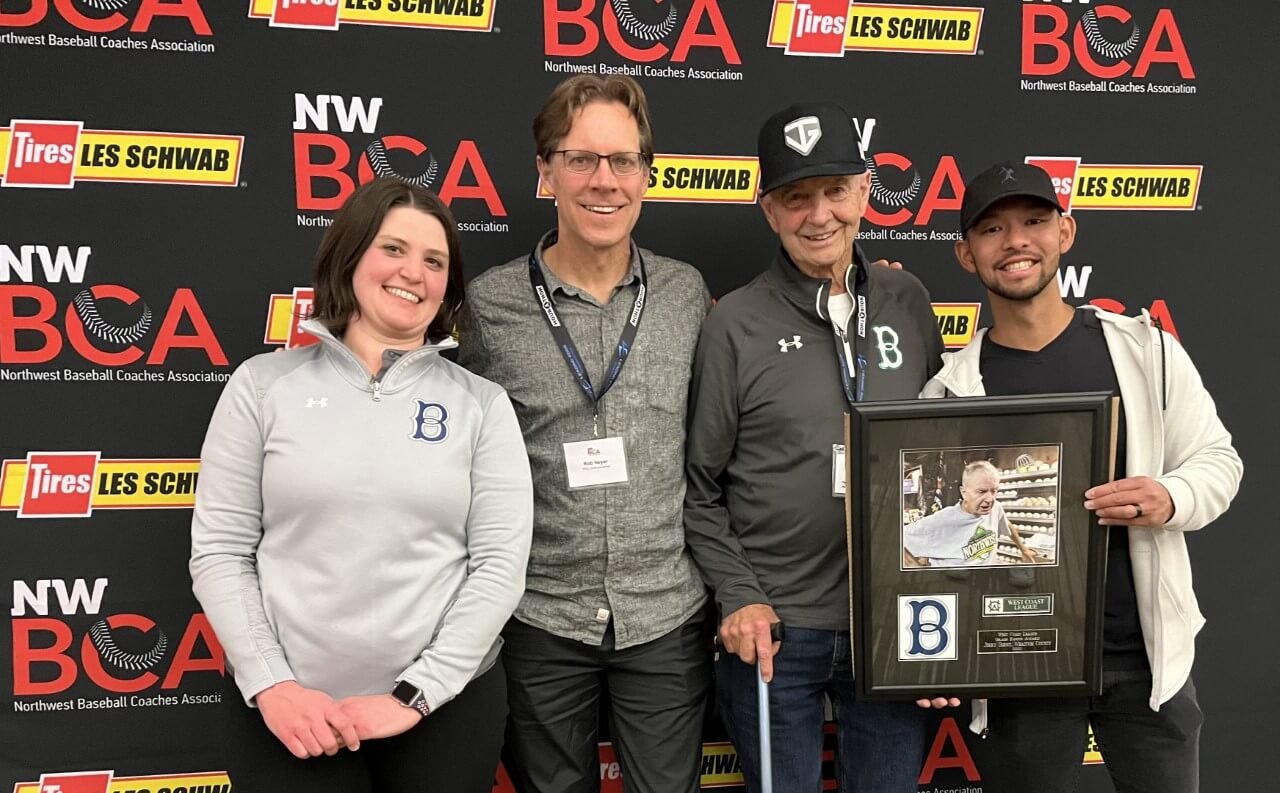 “Our Grass Roots Award celebrates coaches from our communities,” said WCL Commissioner Rob Neyer, “who have spent much of their lives working to promote amateur baseball and help young players achieve their full potential, both on the field and off.

In his introduction during the annual gathering of the Northwest Baseball Coaches Association, San Francisco Giants Bench Coach Kai Correa touted the value of local amateur coaches, after which Bellingham Bells General Manager Stephanie Morrell summoned Coach Smoot to the dais while reviewing a few highlights of Smoot’s many contributions over the decades.

A native of Bellingham, Washington – home of the West Coast League’s Bellingham Bells – Smoot served in the U.S. Marines during the 1960s, including a stint overseas, before coming home and beginning a long career with Puget Sound Energy, “climbing power poles.”

When he wasn’t up in the air, though, Smoot was usually working to create opportunities for young baseball players in Whatcom County.

“As a young coach,” he recently said, “all I taught was winning, and all I wanted to do was win. But I learned it’s all about teaching life skills. I enjoy helping to build self-esteem, and helping kids deal with success as well as failure.”

My recommendation is Coach Jerry Smoot. Coach Smoot in his late seventies and has been coaching in Whatcom County at the youth, middle school & high school level for the better part of 50 years. He is now coaching kids and grandkids of kids he coached on some of his first teams!

Over the years, contributions he has made have included:

– Coaching various teams and mentoring coaches at various levels for 40+ years
– Serving on the board of several local baseball organizations including the Bellingham American Legion
– Loaning equipment to teams and organizations (including the Bells youth camps) and volunteering his time for numerous clinics and camps
– In his younger days, contributing time & money to fields and infrastructure including installing the lights at Joe Martin Field and assisting many local high schools with lights and facilities
– Recruiting host families for the Bells (like 30+ families over the years) and serving as a host family himself until his mid seventies
– Writing an extensive book about the history of Mount Baker legion baseball in Whatcom County (self-published 2021) and distributing to former athletes