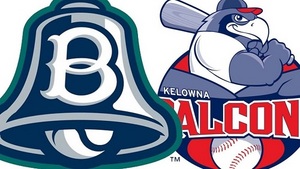 The Kelowna Falcons captured the league’s final playoff spot last night by clubbing Wenatchee 11-3 and getting some help from the WCL South first-half champion Portland Pickles, as Portland knocked Victoria out of the post-season by beating the HarbourCats 10-3 at Wilson’s Group Stadium at Royal Athletic Park.

Kelowna advances to the playoffs for the third time in the past four seasons.

The South second-half champion Corvallis Knights will host the Portland Pickles at OSU’s Goss Stadium on Friday, August 10. First pitch is scheduled for 6:30 pm. Games two and three (if necessary) will be at Walker Stadium in Lents Park Saturday, August 11 and Sunday, August 12. Portland, the league’s newest member, finished with the league’s top overall record at 37-17.

Kelowna reliever and WCL all-star Cal Hehnke of Nebraska-Omaha closed out the Falcons playoff clinching win with a scoreless ninth and three strikeouts. Kelowna was led offensively by WCL all-star Dan Pruitt of Seminole State who went 2-for-2 with a homer and 3 RBIs in the Falcons 11-3 win over the Sox. The night prior, Pruitt blasted two homers in Kelowna’s must-win 15-1 home victory over Wenatchee. Pruitt finished the regular season hitting .331 with 7 home runs and 26 RBIs.