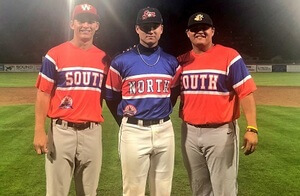 The 2018 West Coast League All-Star Game was powered early by Port Angeles Lefties sluggers Ron Brown of Houston and Kyle Schimpf of Southeastern Louisiana before a packed crowd at Civic Field on a gorgeous evening in Port Angeles, Washington.

Monday’s Saltwater Splashdown champ Ron Brown delivered a RBI single in the bottom of the first inning to put the North up 1-0 while Kyle Schimpf followed with a two-run double to give the North squad the early 3-0 advantage.

The South tied things 3-3 in the top of the second on a three-run home run by the Bend Elks infielder Collin Runge of University of Portland.

Runge’s Pilots teammates Chad Stevens and Cody Hawken of Corvallis would help the South take its only lead of the game in the top of the third, as Stevens opened the frame with a double and scored on a fielder’s choice ground out RBI by Hawken.

The North would tie it back up 4-4 in the bottom half of the third on a RBI single by Kelowna’s Trent Tinglestad of Louisiana-Monroe scoring Schimpf who had reached on his second hit of the game.

Schimpf collected his third hit and third RBI of the game in the fourth inning on a single scoring his Port Angeles teammate Dalton Harum of Virginia Tech to put the North ahead 5-4.

Walla Walla’s Cesar Lopez of Cal Poly Pomona would tie things once again at 5-5 in the top of the fifth inning with a solo home run.

From there, it was all North as they scored twice in the fifth, once in the seventh and two more times in the eighth to capture the 2018 All-Star Game 10-6.

Bellingham’s Matt James of Notre Dame blasted an oppostive field homer in the bottom of the seventh for the North.

On the mound, Wenatchee’s Curtis Bafus of VCU shined for the North as he tossed a scoreless first inning.

Schimpf of the North and Lopez of the South were named co-MVPs as both players collected three hits with Schimpf knocking in three runs and Lopez hammering a solo home run.

The top prospects at the All-Star Game, which was attended by over 20 MLB scouts, were Walla Walla’s Zach Penrod of Northwest Nazarene, Wenatchee’s Jeremy Yelland of Hawaii and Bend’s Bradley Gonzales of Dallas Baptist.