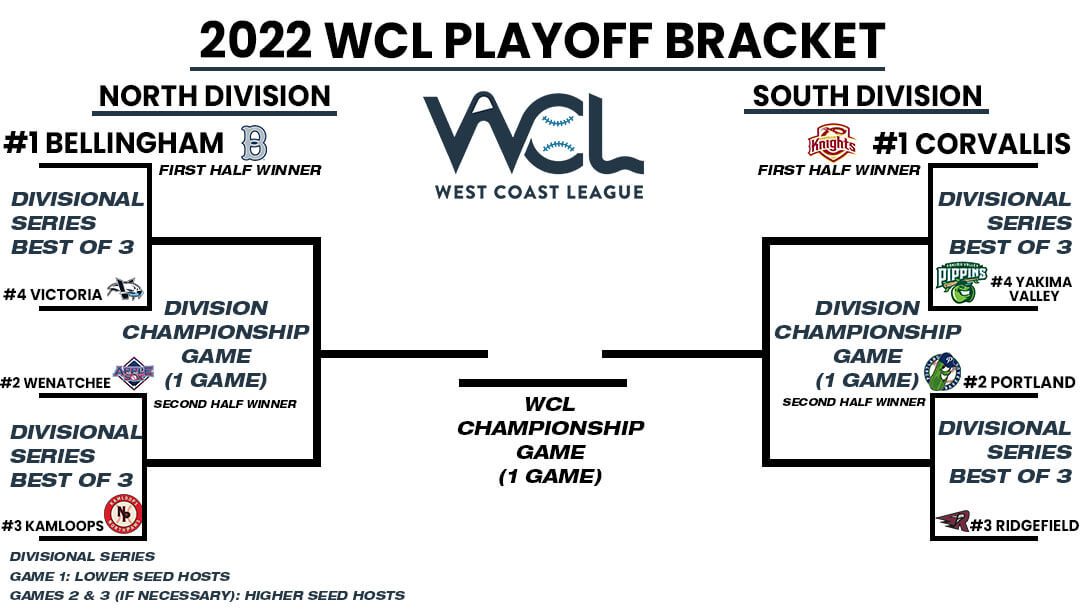 Tuesday night in four locations ranging from British Columbia’s Vancouver Island to Central Washington to the Greater Portland area, the West Coast League’s playoffs are set to kick off in unprecedented fashion.

For the first time in League history, eight teams qualified for the postseason, following a regular season in which the last two playoff spots weren’t determined until the season’s last day. Sunday, the Victoria HarbourCats clinched the No. 4 seed in the North Division with a victory over the visiting Edmonton Riverhawks. And in the South, the Bend Elks fell just short when their heartbreaking loss was followed by Yakima Valley’s tight win in Kelowna.

Tonight, all four divisional playoff series begin with the lower-seeded teams at home.

Down South, the Ridgefield Raptors will host their regional rival Portland Pickles, while Yakima Valley hosts the Corvallis Knights, who finished the regular season with the League’s best record (39-15) and have won five straight WCL championships.

With the new format, though, underdogs have a better chance than ever. After the best-of-three divisional playoffs, both the division and league championships will consist of just one game.

“We hoped for good things with the new postseason format,” said Commissioner Rob Neyer, “but we couldn’t have expected as much drama down the stretch as we wound up seeing. We did know that fans of all eight playoff teams would have the excitement of at least one home game. And we know the sudden-death nature of the second and third rounds of the playoffs will draw interest from everywhere.”

Following Tuesday night’s series openers, all four series will shift to the higher-seeded teams’ stadiums for second and (if necessary) third games in the best-of-three format. The two divisional playoff games are tentatively scheduled for Saturday, with the championship slated for Monday unless there’s a mutual agreement to play earlier.

To get the latest on all of the playoff action, keep an eye on the WCL scoreboard and visit our streaming page to find out how to watch/listen to the games.