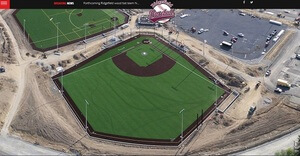 The West Coast League’s newest member, the Ridgefield based WCL team, is pleased to announce that Chris Cota, head coach of College of the Canyons, has been hired as its first skipper in club history.

“We are excited to add Chris to our organization and follow his leadership on the field in our inaugural season,” said Ridgefield General Manager Gus Farah, formerly of the NBA’s Portland Trail Blazers.

“Chris comes highly recommended by many college coaches and colleagues around the country. He will guide our college-aged players with focus on development of their skills and accountability as they work towards their dreams of playing college baseball at a high level and preparing for the MLB draft.”

Chris Cota will enter his 19th season at the helm of the Cougars baseball program in 2019.

“I am thrilled to be part of the inaugural season of WCL baseball at Ridgefield and SW Washington. The opportunity to deliver a great product on the field for our regional families will be extremely rewarding. I can’t wait to get to the Pacific Northwest and play some baseball,” said Cota.

Cota began his career at College of the Canyons as right fielder for the Cougars in 1985 and 1986. In 1986, he was drafted and signed by the Chicago White Sox. Cota went on to play four seasons in the White Sox and California Angels organizations.

He served as an assistant coach under longtime COC head coach Len Mohney for 10 years before he was named as Mohney’s replacement following the 2000 season.