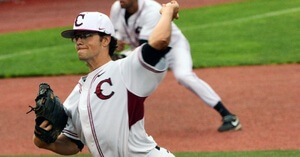 Southpaw Elliot Surrey of UC Irvine tossed a gem this past Saturday night to beat the #1 national seed Oregon State Beavers at their park – Goss Stadium – Surrey’s home last summer. The left-hander pitched for WCL champion Corvallis and posted a league-low 1.27 ERA for the Knights.

UC Irvine routed OSU 14-2 as Surrey tossed seven shutout innings to earn the win before being lifted in the 8th with two runners on. Over 7 innings pitched, Elliot allowed two runs while striking out 8.

Surrey followed his breakout summer with a stellar spring as the sophomore improved his record to 7-4 on Saturday and has posted a 2.15 ERA over 16 starts and 100.1 innings pitched.

OSU, the #1-ranked team in the nation, was led offensively by Gabe Clark who doubled in two runs. Clark played last summer for Corvallis and is scheduled to join the Victoria HarbourCats this summer following the postseason.

The winner of Monday night’s Corvallis Regional finale will advance to the Super Regionals and face Oklahoma State.